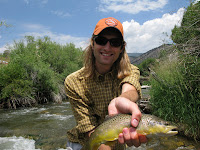 When the hunting is slow...it makes you miss fishing. Here is an essay published in the spring 2009 edition of the Belmont Literary Journal. For a campus publication, I was very impressed with the quality of work that was chosen. I was no where near the creme de la class, but it was an honor to be recognized for good writing at a place where there is a ton of great writing. My friend Carson is going to write a guest post coming in the next few weeks on some of his adventures with the rod and reel. He has far more than I do, coupled with a much more experienced perspective on the matter (in case you haven' t noticed, I like the concept of perspective). In the meantime, I hope this suits your fancy.

The best part about cold hands is how much the hooks hurt when they snag your fingers. My woolen gloves are cut at the second knuckle to expose the ends of my fingers, to make convenient my pathetic attempts at orvis and clinch knots. When the air is this cold on the river, the only way to warm your hands is to remove the gloves, undo the suspenders on your waders, and dive your hands into the front of your pants, all the while attempting to retain any semblance of dignity as a group of seasoned fishermen pass in a drift boat making successful casts to the same exact water that you have been working for the past ten minutes.  However, if I were here for dignity, I would have quit months ago. Also, if I were here to catch fish, I would have quit months ago.  I read fly fishing magazines during the week, explaining the difference between a stack mend and a roll cast, the appropriate situation for woolly buggers, and the importance of quality knot tying. I am still working to keep the same hook tied to the same damn piece of string for more than four casts before it unexplainably disappears into the forest of seaweed, rocks, and mud that is the river bed.

Today is especially brutal, as the high water levels and mid-day start do nothing to coax the trout from their shoreline caverns for a one-course meal of barbed steel, elk-hair, and copper wire. The truth is, I don’t need to catch a fish, I just need a fish to swim up to me, tap me on the leg, and say “Hey, we see you, and we hate to make a fool out of you, but we really are not going to bite that, it’s silly.  Why don’t you just take a break to enjoy the scenery and let some guy who thinks he knows what he is doing wave his stick around so we can make a fool out of him instead.” Then I wouldn’t be wasting my time getting my hopes up thinking “THIS IS THE CAST!” The reality is, I will continue to fish, continue to learn, and continue to make an ass of myself on the river because this sport is so insanely difficult.

I mentioned the thing about the cold hands. I love that part. I love the part where I accidentally stick myself with my 22 zebra midge right on the tip of my middle finger (which in turn I can conveniently wave at my friend Sam, who is fifty yards downstream, in an effort to convey my thoughts concerning my luck and skill at both tying knots and catching fish). I love it because it makes things even. The thing about sport fishing is that it really is not a sport at all. Maybe it is, but it is not like if I don’t hook the fish first, that he (excuse the gendered pronoun) is going to somehow cast a hook baited with a cheeseburger onto the shore in hopes of catching and eating me. I think “sport” may be too generous. Perhaps it can be justified by the exorbitant prices that we pay for gear just to fool a ten-inch rainbow. Hell, if I release him, he’s out a sore lip and an inconvenient trip to the surface, while I’ve paid $200 for my rod, $100 for my reel, $50 for line, $6 for leader, another $6 for tippet, $50 total for flies, and a shitload for waders, vest and boots amounting to another $300. I think I might rather go for the lip piercing and a bottle of scotch and call it even with the fish. Instead, I hold the fish for a few seconds, amazed at the monetary price I pay to anger something that could live in my aquarium.  Back to the point about the hands, the part about making things even. The odds are completely in the fish’s favor, but what does he gain from my presence at the river? The fish gets no satisfaction from winning (not that it should, I am a terrible fisherman), no trophy, not even recognition. The only time a  fish is recognized is when it loses. Cold hands make it hurt, and I think that I deserve to hurt, even just a little, if this is to be called sport.

Like I said, I do not come here for the dignity or the fish. I need this more than anything. I need to feel the river’s steady, uninterrupted rhythm rushing around my feet as I wade carefully in the shallows. I need to move slowly through the silt and stones as I listen to the sound of my legs carefully navigating the current, like the steps of a nervous doe as she steps into the open at dusk. I need the river because it makes me alive. I feel as though I belong here. There is a place for me at the river, and I think it needs me here just as much as I need it. Let me clarify that it does not need me here on my terms, but rather on its own. Nature does not need me to govern, regulate, exploit, capitalize, or intervene on the delicate system of balance. Rather, it needs me to take part in it. The river needs me to cleanse my nervous soul with its peace, because at the river, peace is every step. It needs me to come alive, because as a part of nature, when I am truly alive, then I can truly participate in and appreciate the natural dialogue.

This is what I have learned. In order not to be truly dead before the actual biological event occurs, I must engage in this discourse with nature, I must once again become a part of it. In his commencement speech at Kenyon College, David Foster Wallace gives this amusing yet profound anecdote:

No one thinks about breathing until the first time they cannot. Imagine the first time your brother held you underwater longer than you expected. As he let go of your head, your lips touched air once again and the urgency of your lungs burst into the most violent, beautiful gasp until the deepest and most fulfilling breath of your life moved you back to a state of normalcy.

This is fishing in human terms. The hook pierces, the air suffocates, but now the fish knows what the water actually is. Maybe the fish sat under one rock for its entire life, with nothing else on its mind except that one rock and whatever crustacean meals floated by. It had no idea that there was an entire river to be explored, that there was an entire world of which it is a part. The fish is the same as me. In the same way that the river on my legs and the hook in my finger remind me that I am alive, perhaps the air on its gills and the hook in its lip say the same thing to a fish. There is a part of me that wants to believe that fish do not jump out of the water until a person catches them. After all, you never know that you are dead until you realize what it is like to be truly alive. 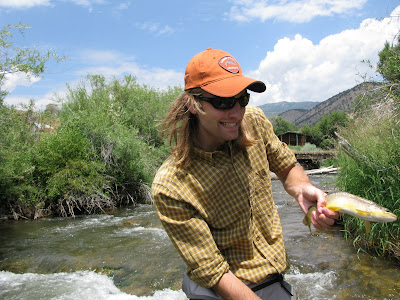