I have since moved back to Tennessee and have switched focus from whitetails to the beginnings of the growing season, turkeys, and the rod and reel. For turkeys, the goal is simple. I have never taken a bird and am committed to success this March and April. This is all dependent on the strength of my interest in a month, but that is the idea for now.

A more concrete and immediate affair of interest is the beginning of the spring growing season. One of my goals is to increase my personal involvement with The Lady’s garden, of which I am already down a few points for missing the seed-buying trip. She knows more than me anyhow, so it will probably work out better that way.  The CSA begins in May also, but the signups are now and that at the very least stokes some anticipation. The snow-dustings and soft morning frosts still remind me that it is February, but afternoons feel like they are stretching and waking up for spring.

The fun part is the full freezer in conjunction with the garden. Sam and I went back to the cooler the week after the season closed and spent a good three hours slicing and gathering venison to be processed. The results are firmly packed away Tetris style in three freezers.  Taylor gets to eat all he can until I come get what I need. Hell of a deal for the both of us.

Bought some new fly gear. New rod and reel, we’ll see if I need money or gear in the coming months.  I’m leaning toward keeping it.  Logic says that I’ll get to make money for the rest of my life, and there is a finite amount of fly rods in the world. It would be a shame to let any of them slip out of my grasp. There is a little part in every fly-man that truly believes that whoever dies with the most rods wins.  I can’t help it.

February is usually the doldrums for the hunter/gatherer. Clay got a new bird dog, and hopefully he gets to hunt over him in the final two weeks of quail season in Alabama. Its a beautiful dog with a strong name. I think that most have a certain affinity for hunting dogs. Strange how the relationship changes a bit when utility is added to the equation, but I can't help but look forward to August and doves thinking about how I don't have to run after those damn birds any more. There is nothing more ridiculous that an grown man hurdling sage and stick with shotgun pointed straight in the air in search of downed fowl.  I'm a lanky six foot three and am quite worthless in this capacity, but I will retrieve to hand and I don't eat my own turds. Its all about perspective I suppose.

In the meantime, I think I'll write some, learn to tie some new fly patterns, and enjoy tobacco that actually tastes like tobacco. Cheap beer, venison steaks, cold hands, and not being stressed about not being in the woods. It isn't all poetic, but I thought this picture was great, even though it is plain. I have some friends who are incredible photographers, and I would love to make some trips with them and hopefully show off some of their work.  Thinking about learning more about bird watching, would love to know where to start. That’s your queue, many thanks. 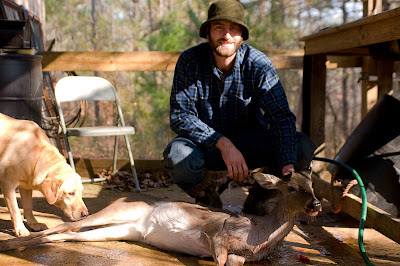 It is raining in the South this week. I suppose that today is Sunday and that means the Alabama Whitetail season is coming to a close in exactly a week and six hours, which is a both saddening and hopeful. I knew this day was coming, and I have been putting this post off because I am nervous about how I want to portray myself and what I have taken this season. The last thing that I wish for the Digest to become is a tally sheet or announcement board. I suppose I just want to be respectful of both the game and others who don’t share the same perspective. I also think that I want the focus to be on the season, on participating with nature.

Sam and I were at his farm two weekends ago with some other friends. The harvest that weekend was beyond anything that I could have anticipated. Each member of the party took an animal, which makes for a memorable weekend no matter what else goes on. Sam is a great hunter, and apparently has some philosopher in his bones. “I like to let the woods just happen. Just be patient and let everything come to you instead of the other way around.” We were still-hunting a creek bed on conceivably the worst day to do it. The ground was frozen and crunched under every step. At the very least we ended up with a quotable morning. That is certainly making a day of it.

This season I had the pleasure of hunting for dove, quail, duck, deer, and pig. I would say that this is my most productive season, but I am not selling anything so we’ll just leave the mechanical language out of it. I have taken two deer, both does, and I could not be happier about it. I took my first Mississippi Whitetail in December, which was a load off of my back. Now I can just enjoy myself over there instead of settling a score. Duck hunting was slow, but I mostly show up for the jokes anyway. I love bird hunting, and if you have never experienced a South Georgia style quail hunt, then dammit I think you should get moving. Doves may have been my favorite, simply because being that close to good friends and shooting three boxes of shells certainly makes a weekend of it. Hay bails be damned, we were the only ones shooting birds out of a group of thirty.

It is nice to wake up in the morning and not be dead tired dragging yourself to the field, or feeling guilty for not doing so. Now I just can’t, and that comes with a strange relief. I suppose that one of the best parts of the fall and winter hunting is honing in on the seasonal aspect of it. It is steady, has its own slow rhythm. Summer is just so distracting. People are all over the place, and even nature moves faster.

I was walking through the woods on Saturday morning and the ground was wet. It was warm and a storm was about to pass through. I climbed the tree and took a little pleasure in the sound that my wet boots made on the steel as I got settled. Sometimes the most insignificant of occurrences lead to mind-crushing self-awareness. I think most people have those moments, where the world pauses and you have that little slip in the space-time continuum to truly love being alive. It is that moment, when your boot squeaks 25 feet up an old planted pine, that the stillness and the smells of the early morning are finally soaked in by your soul. It happened there, at 6:15 in the morning, just when the sleepy sun was reaching through the trees, stretching out the stiffness in its back from its steady rest.

The hardest part of writing this is trying to make everything sound poetic, sound like what it actually is, a matter of life and death. But I don’t really know if that is how I feel about it now. I think that the way of the hunter and the grower and the gatherer is the way that it is supposed to be, and the more you build your life upon those things the less fantastic it becomes. Of course there are days that it all makes sense, that the cosmic alliances become apparent and the gravity of the entire world is made known through one animal taking the life of another. Harvest is a mystery, no matter the season and no matter the pursuit. But sometimes in the end it’s just that things that are spectacular are just plain ordinary, and that is the way that it is supposed to be. The violence doesn’t get to me like it used to, and I certainly have a different sort of gratification than I had four years ago. Now, it is just more satisfying to know that food doesn’t come from a grocery store, and that hunting alone means running the risk of missing the point. Life and death are truly just parts of life, and the more that I learn that the more balanced my perspective becomes, and life grows more satisfying each day. It’s a tight-rope act balancing both gravity and constancy.

So now, I hope that each day I and we can become reconnected with the rhythms of the spring season. My hope is that we can all be blessed with those tiny moments of awareness, and that the harvest from the ground is as plentiful as the harvest of game.