I think that many of you can relate to my desire for the Digest to become more of a forum than a soapbox. Its the middle of the whitetail season and I'm switching focus and putting up a fish post. This is the first correspondence from Clay McInnis, a friend and hunting partner. Clay gave me a fishing report from the Andes mountains in Argentina, which is good, because if I'm ever in the area in the next fifteen years, I'll have an idea on fly pattern and size. 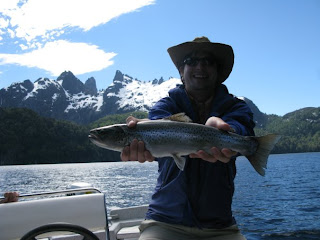 Juan, our fly fishing guide, was going 152 km/h through the winding roads of the Andes Mountains, which was the last thing I needed after 26 hours of travel the day before.  The scenery was gorgeous, with lakes and rivers slicing through the mountain ranges and plateaus that separate Patagonia and Chile.  On our drive to San Huberto we saw wild boar, red black tail deer, bald eagles, Ted Turner’s 37,000-acre ranch and fishing lodge on the Carzancuda River, Condor’s nests, and active volcanoes including the dormant Lanin.  Once we reached the San Huberto Lodge, a picturesque fishing lodge south of Junin de los andes run by a family from Norway, Juan showed us to our room while the cook prepared us a VLT (venison lettuce tomato) sandwich with a pitcher of their very own San Huberto spring water.  Delicious doesn’t do this meal justice.

After traveling over 30 hours I was struggling to keep my eyes open, but Juan wanted us to take full advantage of the sun being out at 9pm.  We put on our waders and eased into Rio Maelleo.  The water was cold and I couldn’t feel my feet, but it was the first time in my life I hooked onto a rainbow after 9:30pm.  My blood started to flow.  The topography and view of San Huberto was unbelievable, and harked a time when dinosaurs roamed the land.  It was the most primitive and preserved place I have ever visited, and if you closed your eyes and tried to hear anything but nature you couldn’t.  The sound of rushing water and nature at its purist was the only thing I could decipher.

During the next three and a half days we caught several rainbows over 22 and 23 and a handful of browns over 18 or so.  Patagonia creek fishing is challenging because you have to play the wind, and the trout are nit picky on the mayflies.  They were hitting the nymphs during the early morning and hitting the mayflies during midday right before our picnic, and during the afternoon they really started hitting the streamers---especially the browns.

On our final day Juan took us to the lake in the Lanin national park, and while the roads where in bad shape the water wasn’t.  The Lanin volcano was broken up by a mountain range that separated us from Chile.  Waterfalls soaked the sides of rock crashing into the lake that was as clear as the Caribbean.   We fist hit the brush on the mountainsides and had luck there with a mayfly and a nymph dropper.  I caught beautiful silver brown that was a 19 or 20, and a few healthy silver rainbows.  As the day progressed we started to tie on streamers and hit the currents in the lake broken up by the waterfalls.  On my fifth cast I got a strike and it hit real hard.  It took a dive towards the broken water and debris coverage, and stole my slack while my reel started to drag.  I was on a 6 weight and my reel was screaming.   I knew this fish was big and healthy.  It took a few minutes to get it to surface and when it did I saw that it was a real healthy brown.  I continued to fight it, and was only hoping that I set the hook.  I held my tip towards the sky because I’ll be damned if this fish is breaking off.  We got him into the net and on the boat and he was worn out.  He was a healthy 25 brown trout that put up a hell of a fight, one that I respected.

The trip that dad and I took to Patagonia is one that I will cherish, and the fact the we were on the water together landing fish of a lifetime brought us closer together, something that you can’t experience going out for pizza and a beer. 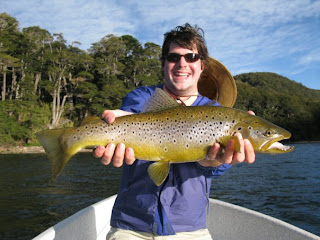 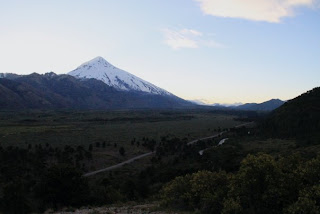 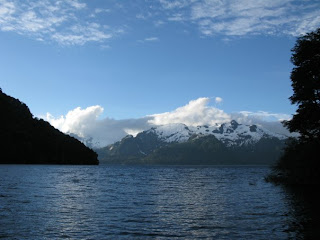 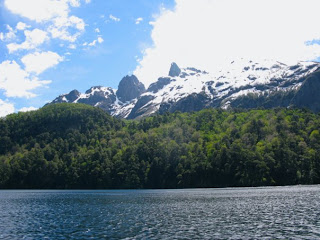 Not that there is anything wrong with beer or pizza. 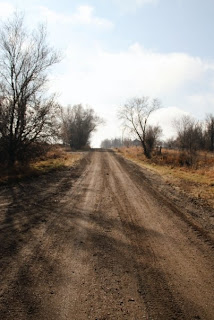 Usually the end of november I find myself in a bit of a rut (and not the exciting kind). Thanksgiving for me is spent in the suburbs of Atlanta, away from the field. The last few years I have come back with an anxiety about the next two months. Whitetail season in both Mississippi and Alabama ends January 31, so there is still plenty of time remaining to fill the freezer and hopefully take that special buck. However, the proverbial half-way point of December 1 does little except aid in remembering missed shots and blown opportunities. The cool part of the hunt is growing and learning, with an ever increasing respect for both the game and success. This is hard stuff (The road is supposed to represent something...can't really figure out what).

Most of those that I hunt with and around have already accomplished their season goals by now, whether that is that first whitetail bow-kill or that yearly buck. That is very nice to see, but it sure doesn't help in decreasing my own frustration. Luckily, there is some venison in the freezer from the roommate that I have access to, so that can hold me over until the arrow connects. Not that I haven't been in a good position. I have recorded seeing 31 deer in fifteen hunts, which is a rate just over 2 deer seen per hunt. At least I'm in the ballpark, even if its the nosebleeds.

I'm searching for some profound thoughts for the digest, but sometimes they just don't come. The season makes you tired, as it should. There are no secret for success, just hard work, knowledge, and skill. By now, you all should be tired, especially if your rut is coming to a close. We're just getting into it down south, so I can imagine that I won't be doing much of anything else in the coming weeks, which is sure to take a toll on mind and body.

When I started to hunt four seasons ago, I remember driving home in the truck after a weekend in the woods and realizing that my shoulders were as relaxed as I could ever remember them. It was as if all of that physical anxiety from living day to day had just left my body. That was the day that I decided that this would be something that I would do, something that I would become. Well, now I sit four years later and I have mixed emotions. The more I learn, the worse I feel at this, even though I am finally putting myself on deer that I have scouted by myself for the first time in my life.  I think I will just be relieved when success finally does come. I really am ready to have that anxious spirit lifted from my shoulders.

So, whether or not you have filled the tag and the freezer, just be encouraged to stick with it.  Its a long season (for some), and it isn't supposed to be easy. Upcoming at the digest we will have a few guest posts from hunters far more successful and experienced than me, including a report from the South Dakota pheasant opener (the photos here are taken by Clay McInnis and are a look forward into that post) and the Mississippi duck opener. Carson will be weighing in on the fishing front, and hopefully I will have some good news to report in the coming weeks. 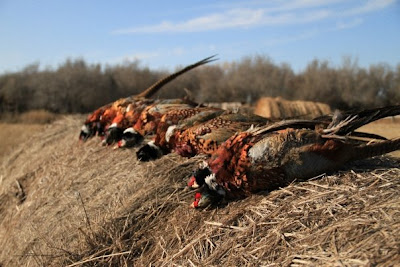