It is once again that time of the year that the discussions begin. These are the early nights at the bar spent comparing schedules and making breakable plans for the coming weeks, discussing the whens and the hows and the whos of the upcoming fishing season. Generally, I like to focus on the local rivers and ponds, fishing Tennessee stockers, bass, and bream. This year I want to catch a mess of early season Bream on topwater flies for the freezer. The plan is a season long fish fry, without the ordeal and the mess. Just clean and tender bream fillets in the freezer to indulge at either my leisure or necessity. I got the idea from John Gierach (who figured out most of this stuff in the seventies) and got the beer batter recipe from Langdon Cook. Things are looking up.

I also like to plan a trip or two to the gulf. Usually I can go fish with Sam or Clay in the salt, and Clay and I really want to experience some night fishing with cork and shrimp for speckled trout. Hopefully his brother will show us the ropes (and the lines, and the bait, and the fish…). 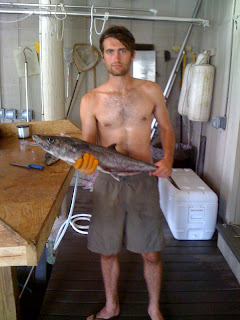 Sam and I went out on what we thought was a great adventure last summer on July fifth. We woke up in a hazy stupor thinking that it was a great day to go trolling about a mile off the beach. The idea was to bag some mackerels by breakfast, but after two hours we were skunked and would have stayed that way had it not been for some very unexpected and creative chumming. Our rods doubled over and we ended up with two great king mackeral, and as soon as mine hit the deck I immediately doubled over with sea-sickness. Trip over.

The in-between season is always refreshing, and mostly because anticipation is sometimes more fun than the real thing. Its when the planners come out, and people like me actually believe that this is the year that they will finally kill that long-beard or get on the water twenty five days. Speaking of water, there’s not nearly enough of it, and what we have is never quite close enough. We are blessed with probably the best tailwater in the southeast, and we never make good enough use of it. I bought a map of the Caney for the first time and it cost me 16 dollars, which says that it might be a little too good. But nonetheless, catching fish is better than not catching fish, even if it means making a few friends that you would rather not have.

Found a great blog today, sparse and to the point. That can only mean that the person responsible spends way more time hunting than writing, which is how it is supposed to be, sort of like a functional woodstove, if you get my dead-drift.

Off to the best sandwich in the city. It’s the best we can do sometimes.