the two in the bush.

We’re lucky to have one of the best urban fly shops in the country here in Tennessee. I find myself just hanging around more often; it’s the one part of the city that doesn’t incubate my nasty little habits. There aren’t any sitting chairs really, but that’s not a terrible thing. I think it is suppose to remind the urban folk to get off of their asses. Urban folks do a lot of running, and its mostly just in a circle, which makes me chuckle a bit, and probably because I’m a means to an end sort of guy. I think that is one reason that a fly shop in the middle of a city is both appropriate and necessary, to remind people like me that there is always something on the end of the line that needs to be stripped in. I don’t think it was designed with that in mind, but nonetheless it holds.

We’re more of a trial by failure pair of anglers, Sam and I. And it’s a process, but little victories keep it moving. The first fish on a new rod is special, a sort of ‘at least the damn thing works’ occurrence. Sam got a new four weight last season, beautiful rod, and he missed six strikes in a row on the Elk the first day he brought it out. I picked it up and switched to a smaller wooly, then landed a respectable ten-inch rainbow in the first five casts. It felt like kissing your best friends sister and then having to tell him that you liked it. At least the damn thing works.

I got my own four-weight this season, and with respect to my own sister, didn’t share it until there was a fish in hand. I suppose I owe him one. Angling is a win some, lose some proposition, and just like hunting, the odds are better when there is someone else around to pick up the slack. When we were trolling for mackerels last summer, I was doubled over barfing up the morning while he made sure we didn’t come home fools. Tiny victories, and maybe we’re even after all.

As for the season, I don’t know that it could improve much more. Life is good. Mean streaks come and go, and the more questions you ask the more you miss the ride. It’s better just to enjoy it. It seems like everyone in my little network of hunting friends is having an amazingswell of spring success. At the Lady’s farm we killed three birds over the Easter holiday. I am not sure how I can tell the story, except to say that two in the hand beats the hell out of one, and that something sure clicked with Alex and the slate call.

It really is beautiful to hunt the wild turkey. I think that Ben Franklin described them as noble, which is hard to argue against. More than any other game animal, the turkey requires a delicate hand and a subtle respect for silence and form. It is a nimble art.  Calling a turkey feels like walking a tight rope, a ‘just enough’ understanding of the razor-thin line between sensuality and violence. And when everything comes together, the early morning taste of tobacco, the whisper of fan feathers dragging across an oak bottom and the smell of gunpowder from a smoking barrel, life if perfect. 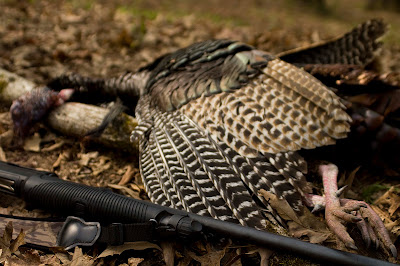